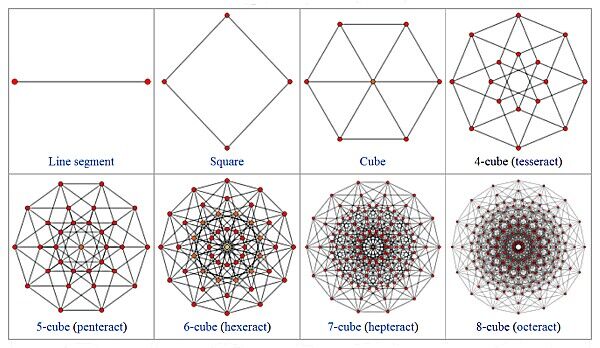 On this page, we will be talking about tiering the mathematical and/or physics based dimensions and who they would apply here on this wikia.

When ranking the strength of characters the natural thing to go by first is physics. However, since infinite force and energy is the highest degree of strength that a character can reach in terms of physics there would be no level of power above what is necessary to destroy an infinite universe, i.e. High 3-A.

Hence, in order to distinguish between the power of characters that are portrayed superior to that kind of power, we use a concept aside from physical strength: The concept of size.

The simple idea is that characters who can destroy much larger structures than others are likely also more powerful than them.

Dimensions are strongly related to the notion of size, as higher dimensional objects can be viewed as being infinitely larger than lower dimensional ones. Hence we use them as levels of power in our tiering system.

Note that while we use dimensions as the main measuring stick, we don’t ignore superior power of other nature. If a power has the necessary qualitative superiority over a certain level it can justify corresponding higher rankings in the tiering system.

One easy way to envision the difference between dimensions is to envision it like the difference between a human and a (living) drawing of a human on an infinitely flat piece of paper. While we can move in 3 directions (upwards/downwards, left/right, forwards/backwards) the drawing can only move on the surface of the paper it is drawn on (only upwards/downwards and left/right). The infinitely flat piece of paper could be folded up to take up practically no volume and hence destroying it would mean destruction of a volume less than that of any 3-D object.

One can easily see the size difference if one looks at simple structures in different dimensions:

In 1-D everything is like a line. A line has only a length, but no width.

In 2-D there are planes, like for example squares. A square has a length and a width. If we talk about size in 2 dimensions we refer to area. However the area of a line is 0, because its area would be given by width x length, but its width is 0 and due to that also the area independent on what its length is.

In a similar manner we can continue for all other dimensions, even if we can not imagine them anymore.

Here you can find an illustrated explanation, which treats the 4th dimension as time, as it is often done.

A menger sponge is also a good example to illustrate the case.

The comprehensible levels of dimensions we can understand or mostly visualize are the dimensions 1-3 which is spatial dimensions that gives form or volume. while the fourth dimension is the dimension of Time In both mathematics and physic.

Zero-dimensionality or zero-dimensional existence is the power to be a singular point, whose nature is something infinitely small in any direction. They are virtually impossible to destroy physically, yet they exist.

By virtue of being infinitely small a singular point is nearly undetectable, impossible to interact with and can not be split into smaller parts. Because of this, it cannot be destroyed physically in a conventional sense.

Depending on the context, such as whether or not the object is an isolated singular point or a single point on a dimensional plane, the object may or may not be completely invulnerable to the physical strength of a being with more than 0 dimensions. However each case must be viewed carefully.

Destruction of any zero-dimensional object is trivial for a beyond-dimensional entity due to such a entity existing outside the concept of dimensions entirely.

The first dimension, as already noted, is that which gives it length (aka. the x-axis). A good description of a one-dimensional object is a straight line, which exists only in terms of length and has no other discernible qualities.

Other uses would be to describe singular line distance, or attacks which are simple beams that do not explode.

Add to it a second dimension, the y-axis (or height), and you get an object that becomes a 2-dimensional shape (like a square or other shapes with a squared area). Which is a geometric setting in which two values (called parameters) are required to determine the position of an element (i.e., point). In mathematics, it is commonly represented by the symbol ℝ2.

This would include various abilities that involve area of influence involving square area.

The third dimension involves depth (the z-axis), and gives all objects a sense of area and a cross-section. The perfect example of this is a cube, which exists in three dimensions and has a length, width, depth, and hence volume. Beyond these three lie the seven dimensions which are not immediately apparent to us, but which can be still be perceived as having a direct effect on the universe and reality as we know it.

This dimension would involve volume means of DC which an attack covers a certain area and is effected by the means of destruction.

Scientists believe that the fourth dimension is time, which governs the properties of all known matter at any given point. Along with the three other dimensions, knowing an objects position in time is essential to plotting its position in the universe. This one does not have any known axis to visualize it but we know that there is one.

In order to understand the size difference between different dimensions, we first have to understand how size is quantified in mathematics. In order to do that we need to define various mathematical structures. Prerequisite for understanding the following is knowledge about what the terms function, set, subset, power set, union, intersection and complement mean in a mathematical context.

If we want to deal with size mathematically, what we want to do is to assign a subset of some set S (which is our space) a number that quantifies its size. That means we want to define a function that projects from the power set of S unto a non-negative real number or infinite.

However, one can show that for size quantifications, that match our intuitive understanding of size, there is no such function if one really wants to define the function on the entire power set. Hence the function is instead only defined on a certain subset of the power set, the elements of which are called the measurable sets. But instead of choosing just some random subset of the power set we want that subset to be sufficiently rich in sets to properly work with it. This motivates the definition of a σ-Algebra:

Let S be a set and A be some subset of the power set of S. A is called a σ-Algebra if:

3. If for any, up to countably infinite many, sets in A also the unification of the sets is in A.

More generally, given any cardinal κ, set S, and A a subset of the power set of S, A is called a κ-Algebra:

3. If for any ≤κ many, sets in A also the unification of the sets is in A.

A measure is the aforementioned function that projects the subsets of S, or more specifically the sets in the σ-Algebra A of choice, unto the non-negative real number that represents their size (or unto infinite).

A measure has to have to following properties:

1. The size of the empty set is 0. Or intuitively spoken the size of nothing is 0.

As one can guess from how general these properties are, there are many different measures on many different σ-Algebra and most of them don't classify what we imagine under a volume, even if they give something similar to a size. Hence we have to further specify which measure we want to use if we talk about size.

In order to have a measure that quantifies our understanding of size we wish to demand two more things than just basic measure properties. This things are:

Some measures that fulfill this properties are the n-dimensional Hausdorff measures, if defined on the fitting Borel-Algebra. The Borel-Algebra is the σ-Algebra one gets by starting with all open subsets in the n-dimensional real coordinate space (or all closed sets, compact sets or half-open cubes) and adding in all sets necessary to make it a σ-Algebra. This Algebra is sufficiently extensive to quantify the size of pretty much any real life object.

Hausdorff measures have another property which makes them size wise intuitive.

How to classify the dimension of subsets of higher dimensional space is no easy question.

However one elegant solution comes due to the fact that, as priorly suggested, one can apply a lower-dimensional Hausdorff measure unto a subset of a higher-dimensional space (for example a submanifold).

Using this the Hausdorff dimension is defined as follows:

"The Hausdorff dimension of some subset of the n-dimensional real coordinate space (where n is some arbitrary natural number) is the lowest number d so that for all d', that are greater than d, the d'-dimensional size of the set (using the Hausdorff measure) is 0."

"The Hausdorff dimension of some subset of the n-dimensional real coordinate space (where n is some arbitrary natural number) is the highest number d so that for all d', that are smaller than d, the d'-dimensional size of the set (using the Hausdorff measure) is infinite."

One interesting thing to consider if one wishes to get a sense on how large the difference between dimensions could be is the following:

Prerequisite for this part is some understanding of abstract algebra

The first thing to understand are ordered n-tuples of sets. There are various ways of constructing ordered n-tuples, but the only thing that is important is that (a0...an)=(b0...bn) only if each a0=b0...an=bn. Then:

The Hausdorff dimension is for S⊆ℝn. By itself, ℝn is not that interesting. What is more interesting is discussing various rotation groups. Treat vectors as arrows, starting at (0...0) (n zeroes), and ending at (a0...an). These can all be described by points (a0...an). Under standard vector addition and multiplication, when n=2,4,8, the structure (ℝn,+,•) is a division algebra.

The Hurwitz theorem states these are the only such algebra, and so they have special names and symbols: ℂ, the complex numbers, ℍ, the quaternions, and 𝕆, the octonions. The rotation group O(n) consists of all distance preserving n-dimensional transformations the preserve a point. An important subgroup is SO(n), and U(n)≅O(2n) and SU(n)≅SO(2n).

Community content is available under CC-BY-SA unless otherwise noted.
Advertisement