Inuyasha's group has been formed from humans and demons, they have went on many adventures, fought new enemies and seeking to bring an end to the calamity across the land by helping others and gathering the Sacred Jewel shards and defeating their greatest nemesis Naraku.

The purpose of the group is around their mutual goals such as finding the Sacred Jewel Shards and destroying their most sworn enemy, Naraku.

Tier 12: Dark: The group is operating in a feudal era Japan where it is the age of the Samurai, so they would have basic katanas, sandals, etc. (With some modern day items from Kagome).

Divine: Demon Physiology (Inuyasha, Shippo and Karara have demon physiologies that can provide them some resistances such as Poison Resistance) Purification (Miroku and Kagome have abilities that allows them to destroy evil demons) Vortex Creation (Miroku with his Wind Tunnel which can such in almost anything into his hand)

Nature: Superhuman Physical Characteristics (Sango is trained to be a Demon Slayer and would have above average human physique skills, along with Inuyasha) Human Physiology (Sango, Miroku and Kagome are humans with higher stats and divine powers) Demon Physiology (Inuyasha, Shippo Kirara are demons)

Tier 13-A: Multi-Buildings: The members of the team operate from their own homes but meet up in a village around the Bone Eaters Well.

DC: Small City: Inuyasha is superior to Tōsōsai, who has showcased such kind of power), can ignore conventional durability with the Black Tessaiga. Small City: Miroku, Sango and Kagome should be comparable, with Miroku and Kagome based on their spiritual abilities. Street: Miroku and Kagome have standard human strength.

Durability: Small City: Inuyasha survived his own attack that was reflected back at him, though he was grievously injured and could fight the next day, even blocked an attack from Sesshōmaru. Unknown: The durability of the other members of the group (Likely Street level).

Speed: Superhuman: Inuyasha's running speed as he could keep up with modern day trains. possibly Hypersonic+: Reaction speeds of Inuyasha as he can react to lightning. Athletic Human: the speed of Miroku, Kagome and Sango (The later is likely faster).

Their greatest strength comes from their high level members that looks out for the other members of the team, they also take initiatives in being the first group into battle in most occasions and gives time for their allies to join in. Their skills are diverse with their different species and roles such as spiritual powers, demonic powers, superhuman physiques.

Sometimes they need Inuyasha in their fights, but when there is a Lunar Eclipse, Inuyasha loses his powers, most of the human members have regular human stats. 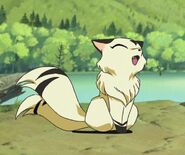