Universal Conquest Wiki
Register
Don't have an account?
Sign In
Advertisement
in: Real Life, Profile, Work In Progress,
and 8 more

Kabul
The Profile for the Islamic Republic of Afghanistan from the Real World.

Afghanistan (Pashto/Dari: افغانستان,Pashto: Afġānistān, Dari: Afġānestān) officially the Islamic Republic of Afghanistan is a mountainous landlocked nation located in South Central Asia, bordering Pakistan to the south, Iran to the West, Turkmenistan, Uzbekistan, and Kyrgyzstan to the North, and China to the East. It has had a long history of foreign conquerers and strife among local warlords, despite being a nation even in the modern era, and has since gone through numerous reformations of their Government.

Tier 10: Industrial: Afghanistan has limited production capacity aside from their fossil fuel, furniture, foot-ware, etc. despite most of the world is more modernized.

Nature: Human Physiology (The members of the faction are humans with standard skills in combat) Martial Arts (The troops of the military have standard training)

The ANA Commando forces roles are to carry out operations across Afghanistan to disband illegal and unregistered armed forces. The training of the new Afghan army would have some decent training from U.S. officials.

Despite training a new army, the military is still not modernized compared to other nations. 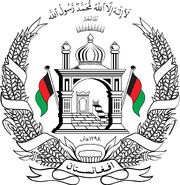 Seal of the Afghan President