Universal Conquest Wiki
Register
Don't have an account?
Sign In
Advertisement
in: Profile, Tier 5 Civilization, Work In Progress,
and 9 more

First City, Qo'nos
This is a Profile of the Klingon Empire from Star Trek.

The Klingon Empire was the official state of the Klingon people. It was founded in the 9th century by Kahless the Unforgettable, who first united the Klingon homeworld of Qo'noS. Since then, the Klingon Empire expanded its sphere of influence by conquering numerous systems and incorporating them. This made the Empire a major power in its region of the galaxy, as of the 22nd, 23rd, and 24th centuries. It has become a major threat to the other powers in the galaxy such as the United Federation of Planets and the Vulcans.

Tier 5: Stellar: They possess the means of travelling across the multiple systems in unspecified time time where they have developed the means of cryosleep, where the crew goes into deep sleep and be prepared for when they reach their intended destinations.

Science: High-Tech Weaponry (The Klingons possess phaser and disruptor weaponry which can burn holes right through enemy soldiers and explosives that can damaged warships that are meant to withstand the hazards of space.)

Nature: Martial Arts (Being the warrior species that they are, they are trained to be gifted fighters that can hold their own on the battlefield, whether that be long or close range, with throwing knives, their own blades or hand to hand combat) Alien Physiology (Klingons which are powerful alien warriors, though have changed and mutated overtime)

Tier 6-A: Multiple Systems: After the achievement of space travel, they managed to conquer many planets in their height. They are known to have around 29 planets and roughly 5 star systems inside their empire.

DC: Country: the Klingon Battle Cruisers possess firepower that can destroy entire surfaces of planets with ease. Large Island: Klingon battleships fire power comparable to other battleships and their own when firing at other ships without deflector shields. Small Building: Klingon warriors when using phasers and disrupters which is equivalent to plasma blasts (Likely higher with heavy weaponry). Wall-Street: Klingon warriors in close quarter combat, varies When using blades or physical combat.

The Klingon's greatest strength comes from their warrior heritage, thus when in battle, the Klingon's go for a strong assault on the enemies, overwhelm them with power. Though there are times that certain Klingon leaders display strategic skills that won the empire many battles and claimed large amount of territory over the sectors. They are also very devoted and strong willed people, that they can go into conflict for long periods of time without receiving psychological stress. Any Klingon warrior alone is a fierce fighter, capable of going toe to toe with even skilled human fighters when it comes to close quarters combat.

Because they are a species that is bound to ancient Klingon traditions, they are subject to warrior code which means that any warrior should die in battle, survive by their own strength or kill themselves for dishonor. Though they possess the means of advanced weaponry and starships, they are sorely fallen behind other space faring factions in areas of technology and research, even lacking in the basics of medical improvements. Even attempts in chemical warfare to create super soldiers created a virus that threatened to wipe out the Klingon race. 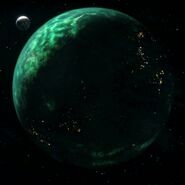 Qo'nos, the homeworld of the Klingons

Bat'leth, meaning "Sword of Honor", the standard and famous weapon of the Klingons.

Kahless the Unforgettable, the first Emperor and savior of the Klingon People.