Magi: The Labyrinth of Magic

Rakushou
This page is for the Kou Empire from Magi: The Labyrinth of Magic.

The Kou Empire (煌帝国, Kō Teikoku) is a large military nation, considered one of the most powerful in the current era because of the number of Dungeon Capturers and armies it controls. Their High Priest is Judar, one of the five Magi of the current era. The capital is Rakushou. The empire is also described as very aggressive, using any reason to attack another nation.

The Kou Empire having some of the largest military force known possesses multiple forces that make up it's organization:

Tier 12 Dark: The Empire is remaining around the Feudal Age, with swords, stone walls and castles that are well defended.

Magic: Summoning (Mages are capable of summoning various Djinn that they utilize in the form of combat to attack their enemies with) Symbiotic Relationship (Mages and Djinn work together when they go into combat, or when they under go Djinn Equip) Spirit Physiology (The Djinn born from memories and personalities of individuals with Rukh)

Nature: Human Physiology (The Humans of this world possess the ability to use Magic)

Tier 8-B: Continent: The Kou Empire has dominance over majority of the Far East continent.

Speed: FTL: Kouen Ren managed to blitz Alibaba who reacted to Light based magic attacks. FTL: Elite members are comparable to that of Kouen Ren. Unknown: The speed of regular soldiers.

The Kou Empire is one of the world's superpowers. It takes advantage of its Dungeon Capturers to invade other countries. Recently, they have even acquired dungeon monsters for their army. They also possessed a powerful naval fleet and flying carpets for transporting troops.

Magicians are also employed within their ranks and are stationed in various locations, which they transmit communication through long-range Clairvoyance Magic. However, this was a highly classified secret.

The Kou Empire has a huge land span and has hordes of territories and vassals they conqured with hordes of armies armed with magic weaponry of all kinds.

The weakness of the Empire is Al-Thamen and the corruption upon the Political system which is bloodthirsty for conquest and usage of slaves. 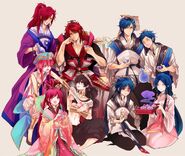 Princes and Princesses of the Kou Empire 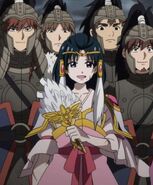 Location of the Kou Empire
Community content is available under CC-BY-SA unless otherwise noted.
Advertisement