Universal Conquest Wiki
Register
Don't have an account?
Sign In
Advertisement
in: Warhammer 40k, Profile, Work In Progress,
and 11 more

Unknown
This is a profile for the Orkz from Warhammer 40k.

The Orkz were once created by the Old Ones, to be the secret weapons to fighting the Necrons, until they later turned on their creators and started fighting everyone they can find, launching space fairing wide WAAAAAAGH!s

Tier-4 Galactic Domination: Their Reality bending powers allows their crude technology to travel and expand their barbaric infestations across the galaxy to wage wars and sow destruction.

Science: FTL Travel (Orkz are capable of traveling at incredible speeds across the galaxy using the Warp), Robotization (The Orkz can implant various techs to themselves to make them more stronger) Alien Physiology (The Orkz are created by the Old Ones artificially compared to other life forms in the Galaxy)

Psionic: Psychic Empowerment (The Orkz are known to bend the laws of reality and making things as they want them to be with group mentality)

Unknown: Those their conquests varies in size and expansion, their presence exist across the entire milky way galaxy.

Speed: FTL: Ghazghkull being able to defeated Space Marines who have reaction speed in the nanoseconds. FTL: Using ships that are made from Space Hulks that drift in and out of the warp. Unknown: Spacecrafts maneuverability in space. Hypersonic: Ork aircraft in atmosphere of a planet. Superhuman+: Ork vehicles and jetpacks speeds. Superhuman: Ork infantry movements.

They are a war driven species that desire nothing but conflict and destruction, they're morale would be bolstered by provocative actions and threats. They tend to overwhelm their enemies with large forces and melee proficiency. They possess their own unique physiology and combat fighting skills that allows them fight for indefinite periods of time. They have strong charisma, depending on who leads them in their warbands or Clanz. Though their technology is crude and primitive, they make them devastating with their psychic fields and crowd mentalities in their WAAAGH! energy.

Their warbands and WAAAGH!s can be easily proken if one kills the leader of the Ork bands, for their hierarchy and fighting spirit is based on sheer body mass and fighting skills.

Warlord Ghazkull, one of the biggest Orks to ever lived. 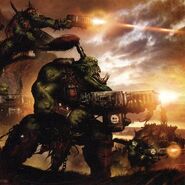 Ork activities across the galaxy and all the WAAAAGH!s. 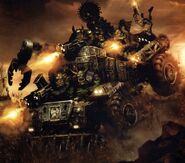