By the Shahanshah
The Pahlavi Dynasty is an Iranian Regime from the Real World.

The Pahlavi dynasty (Persian: دودمان پهلوی‎) was the last ruling house of the Imperial State of Iran from 1925 until 1979, when the Persian monarchy was overthrown and abolished as a result of the Iranian Revolution.

Tier 8 Industrial: The Empire is remaining around the Industrial Age when it comes to extracting and expediting Oil.

Science: Construction (Under the vision of the Shah, they have sought to modernize their nation in a western style fashion. They have oil as a viable resource.)

Nature: Human Physiology (The members of the faction are humans with standard skills in combat)

Tier 9: Country: The Iranian regime controls over 636,400 mi^2, including the small island of Bahrain.

Attack Potency: Large Building: With shelling from cruisers which can cause massive damage to particular areas. Small Building: The destructive power of tanks which can level small structures. Street: Iranian soldiers with standard firearms. Athletic: Iranian Soldiers in physical combat.

Speed: Supersonic: Top speed of the Tomcats at 1544 mph. Superhuman: The speed of cruisers and tanks on road. Athletic Human: The running speed of Iranian soldiers.

The Military is just like the Monroe Republic uniform, except All new recruits at some point have the Pahlavi Crest instead of an "M" branded onto either the right or left wrist. This serves as a means of identification among soldiers.

New conscripts or recruits wear black uniforms with a number on the upper sleeve. The simple design makes them easy to manufacture, and the number allows for easy identification of the recruit.

Enlisted or conscripted soldiers wear dark grey-blue uniforms with a shoulder patch showing the insignia of the Pahlavi Flag for field duty. The color allows for easy identification of friendly troops on the battlefield, as well as some measure of camouflage. Some troops, possibly Non-Commissioned Officers, wear crude leather armor, although it is not effective against bullets or crossbow bolts. Certain elite soldiers wear pre-Blackout bulletproof vests and military backpacks for some operations. Their use of Humvees and M35 trucks makes them a rapid response force of sorts.

Officers wear the uniform of the Imperial Guard of the Pahlavi Dynasty.The Imperial Guard (including conscripts outside the Javidan units) are highly trained force that maintained order in the close perimeters of the Capital of Tehran.

Iran is oil rich and draws attention of many powerful nations that seeks to make them their ally and has hordes of mountains that gives them territorial advantage.

When Reza Shah overthrew the Qajar Dynasty, he created schools, railways and hospitals with many more buildings. Jobs were even created at the Anglo-Iranian oil company for Iranians.

Because of their opulence, secret police and lake of empathy for the common people, led to unpopular support and to an inevitable revolution, Islamic Fundamentalists led by a certain Cleric could overthrow the Pahlavi Dynasty as they did in 1979. The Shah was mostly hesitant fearing his influence of getting allies won't work if he harshly cracked down on his people.

Reza Shah had incompetent generals during the Soviet-British invasion of 1941 which proved his army worthless against it's occupiers. The invasion was inevitable since the British were southeast of Iran in India and the Soviets were north which was a bad thing since Reza Shah was sympathetic to Germans since Germans and Iranians considered themselves Aryan. Plus they would have done it anyway since Winston Churchill stated that Iran was the bridge to victory.

Iran also made a mistake in destroying democracy in 1953 when the US with British aid helped with a counter coup against Mossaddegh when he tried to nationalize Iranian oil from British control. The Mossaddegh mess left a bitter legacy within the Pahlavi Dynasty in years to come.

The Shah mostly during the 70's celebrated the 2,500 years of Persian Monarchs which costed a lot of Iran's economic welfare. The shah was so focused on westernizing his country it angered clerics like Allatoyah Khomeini who spoke against him. 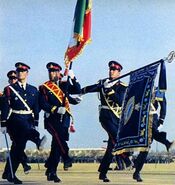 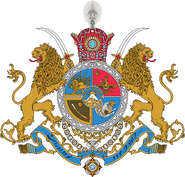 Imperial Coat of Arms of Iran 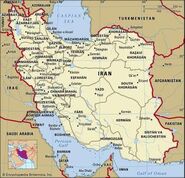