The Principality of Zeon are a dictatorship from the colonies seeking to conquer the Earth Sphere in Mobile Suit Gundam.

The Principality of Zeon was formed out of the Side 3 colonies of the Earth Sphere after they declared independence from the Earth Federation and elected Zeon Zum Deikun to be their leader, with the name of the nation being taken in honor of him. After Deikun's death however, his chief of staff Degwin Zabi took power and declared himself Sovereign, converting the Republic of Zeon into the Principality of Zeon. His eldest son Gihren, who had served as the chair of Deikun's election campaign, became Prime Minister and Commander-In-Chief, while his other children were all named key commanders in the Zeon military.

Tier 6: Planetary Colonies: Though having less numbers than the Earth Federation, Zeon was able to invade it and occupy several other colony clusters for a time during the One Year War.

Science: High-Tech Suits (The members of Zeon are capable of manufacturing mech suits for war with their own weaponry)

Nature: Human Physiology (The members of Zeon are humans from earth in a future where they are capable of expanding into space) Driving Mastery (Members of their military are skilled at piloting mechas into battle)

Tier 7-C: Small Continent: The Zeon forces are capable of wreaking havoc on Earth and holding it for a time, even occupying large swathes of the planet during their ground invasion.

DC: Multi-Continent: Under the direction of Gihren Zabi, Zeon is responsible for pioneering the tactic of the "colony drop", dropping a large colony or space object onto Earth in an attempt to completely obliterate a target. During Operation British, Zeon gassed a Side 2 colony and dropped it on Earth in an attempt to obliterate the EFF headquarters, resulting in about 22% of Australia being physically destroyed and drastic changes in Earth's climate, ultimately resulting in the deaths of approximately half of Earth's population. Continent: The Solar Ray, a titanic beam cannon created from hollowing out a colony, possesses the power to completely obliterate the EFF fleet with one blast. Island: A single Zaku is capable of wreaking havoc on a space colony, as shown in Zeon's initial attack on Side 7. The Zeon forces also possess nerve gas that is potent enough that, if enough is used, it is capable of exterminating the populations of entire colonies.

On account of living in colonies, Zeon are highly experienced in space combat especially when compared to the Earth Federation's forces. They are also prone to destructive tactics such as colony drops, which caught the Earth Federation off guard in the opening stages of the war. Zeon's war effort also has much more support from its civilians, who are fanatically devoted to Zeon's cause thanks to the charisma and oratory ability of its Commander-In-Chief Gihren Zabi.

The main assets of the Zeon military are their mobile suits, mecha outfitted for space combat. In contrast to the Earth Federation Forces, the Zeon military has a much wider array of mobile suits each built for specified purposes. Zeon also possesses numerous other military vehicles built for space combat, but their most powerful weapon is the Solar Ray, a colony laser whose development was overseen by Gihren himself.

Though they possess a diverse array of mobile suit models, the variance in design makes it harder for Zeon to produce mobile suits as many require different and unique parts. Zeon would eventually attempt to amend this by introducing the United Maintenance Plan, an initiative to use the same standardized parts for all their future machines, but this came late in the war.

Zeon's high command was also much more prone to infighting than that of the Earth Federation, whose high command were more or less unified in opposition to Zeon. Though Zeon's government was dominated by Gihren and his strong cult of personality for most of the war, by the time the battle of A Baoa Qu started the upper brass of Zeon had collapsed into infighting, resulting in the deaths of many of their key leaders and the loss of their forces. 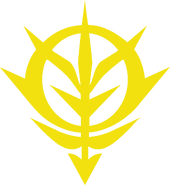 The sigil of Zeon. 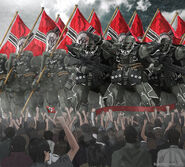