Universal Conquest Wiki
Register
Don't have an account?
Sign In
Advertisement
in: Profile, Location, Lord of the Rings,
and 3 more

This is a profile of the country of the Rohan from Lord of the Rings.

Rohan, is the home of the horse lords, one of the great kingdoms of man, before it was called Calenardhon, it is a great vale for the horses to gallop freely and make Rohan a great nation of cavalry riders.

The nation is rich with lush greenfields of grass, as said before, most suited for Horses, it shares a central Asian and north American landscape, same with it's climate. It also borders on mountain ranges such as the White Mountains, it borders on forest areas and have various rivers.

The Weathers there is very mixed, since it shares much the same climate as Central Asia, it is very cold in the winter times, very hot in the summer times, but around September, it is rather cool and good for harvest. And temperature should be least than 64 degrees with higher elevation.

Because of it's location and environments, it experiences the seasons in a rather balanced manner.

The nation is mostly inhabited by humans, Ents.

Edoras, the capital and home of the Rohan kings. 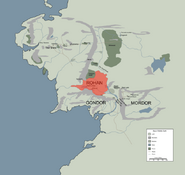 Rohan kingdom size on the map of Middle Earth.
Community content is available under CC-BY-SA unless otherwise noted.
Advertisement