General Secretary of Soviet Union
This is a profile for the Soviet Union from the Real World.

The Soviet Union, officially the Union of Soviet Socialist Republics (USSR), was a federal sovereign state in northern Eurasia that existed from 1922 to 1991.

The Soviet Union was the first totalitarian state to establish itself after World War One. In 1917, Vladimir Lenin seized power in the Russian Revolution, establishing a single-party dictatorship under the Bolsheviks.

A collection of national Soviet republics, its government and economy were highly centralized. The country was a one-party state, governed by the Communist Party with Moscow as its capital in its largest republic, the Russian Soviet Federative Socialist Republic (Russian SFSR). Other major urban centers were Leningrad, Kiev, Minsk, Tashkent, Alma-Ata, and Novosibirsk.

Tier 9: Atomic: The Soviet Union has since been a superpower since the end of the Second World War as they managed to get their hands on an atomic bomb on August 29, 1949.

Science: Construction (The Soviets have been a leading power of means of mass production of weapons and vehicles that would contend with the United States)

Nature: Human Physiology (The members of the faction are humans with standard skills in combat)

Tier 9-A: Multi-Country: The Soviet Union has the Nations of East Germany, Poland, Czechoslovakia, Hungary, Romania, Bulgaria, Yugoslavia, and Albania as Puppet States in Europe.

Attack Potency: City: The TNT of the Tsar Bomba being 50 megatons of TNT. Small Building: Soviet Naval Vessel explosive damage which should be comparable to other Naval vessels destructive power. Building-Small Building: Soviet Tank's strength with the main gun. Wall: Mil Mi-24 with Gatling gun (Fires rounds that hit with this much force)/autocannon/grenade launcher (The 30mm GSh-30k fires 390 gram projectiles with a muzzle velocity of 940 meters per second, and the GSh-23L fires 23mm projectiles at a velocity of 715 meters per second, which would put the energy of both the GSh-30k and GSh-23L in the Wall level range, with the AGS-17 grenade launcher in a similar range as well) Street: Soviet Weapons such as AK-74 Firepower from its 5.45x39mm cartridge can range between 1300-1461 J). Athletic: Standard Soviet Soldier melee strength with weapons.

Speed: Subsonic: Mil Mi-24 flight speed (Regardless of the version, it's speed is in this range) Superhuman: The speed of Soviet Vehicles. Athletic: The running speed of Soviet Soldiers.

The Soviet Union possesses a massive army, they use that to their advantage when they seek to overwhelm their enemies, They have knowledge of their terrain, they can manage to outflank their enemies or take advantage of them, if incompetent, the Soviets can wait out their enemies in the harsh winters. Benard Montgomery had once said that Russia had two invasions, one from Napoleon and one from Hitler and both were catastrophes for the invading armies. The Soviet Union has many puppet states and nations that serve as a means of deterring it's enemies from possible invasions or to be prepared when going to war, with the usage of a nuclear arsenal and spread their Communist Ideology.

The Soviet Union being the largest nation at the time, still had multiple factors for it's collapse, such as economic shortage of consumer goods, as well as majority of it's spending went to military funds, leaving civilians in a rough spot.

One of their more dreadful moments was during World War 2, under Stalin which caused massive casualties of both military and civilians in 26 million people, despite the Pyrric victory.

The Spread of the Communist Ideology

Moscow, Capital of the Soviet Union

The Army of the Soviet Union 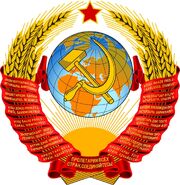 Coat of Arms for the President of the USSR
Community content is available under CC-BY-SA unless otherwise noted.
Advertisement