Thousand Sunny Ship
This is the profile for the Straw Hat Grand Fleet from the One Piece series.

The Straw Hat Grand Fleet is a fleet formed by seven pirate crews of strong and powerful pirates who vowed to serve under Monkey D. Luffy and the Straw Hat Pirates after the Dressrosa Event.

The Grand Fleet is a combination of multiple Crews and Races:

Tier 11: Exploration: They live in a world where the ships are styled in the Brigantine ships, as they can travel vast distances and even at times whether storms.

Nature: Supernatural Objects-Food (Many individuals have eaten what is known as Devil Fruits which grant time super powers) Precognition (Those that possess Observation Haki can perceive incoming attacks before they hit them) Combat Enhancement (Those that have Armament Haki can enhance their attacks, which can nullify enemy Devil Fruit abilities) Human Physiology (Most of the members of the Fleet are humans with their own attributes and abilities) Fae Physiology (The Dwarves with their speed and small size)

Science: Robotic Enhancements (Particularly with Franky with being a Cyborg and can possess many weapons and tech and can upgrade his body or Thousand Sunny ship from time to time.)

Tier 9-C: Small Country: While most of the pirates are just fleets of ships, their allies of Riku Family in Dressrosa Kingdom and King Elizabello II.

After the formation, the total man power of the Grand Fleet is roughly around 5640 members and around 69 ships (including main pirate ships)

DC: Island: with Luffy when using 3rd Gear (Comparable to Katakuri) and 4th Gears variants such as Tank-Man and Snake-Man should be comparable or stronger when compared to Bound-Man (likely higher with tanking hits from Yonko Commander level attacks). Mountain: Luffy in Base along with his elite crew members such as Zoro and Sanji (who the former could cut a giant mountain man in half). City: The strength of the other Straw Hat Pirates, along with other representatives which should be around their level. Wall: The power behind a cannonball. Wall-Street: The attacking power of standard crew members comparable to Marine soldiers.

Durability: Island: Luffy at his strongest was capable of tanking attacks from Yonko Commander level enemies, which one (Marco could take on an Admiral of the Marines). Mountain: Luffy while in base, along with Zoro and Sanji should be similar. City: the rest of the Straw Hat Pirates via power scaling with Nami who can endure some of Sanji's techniques while he was possessing her. Small Building: The durability of regular ships halls. Wall-Street: The Durability of standard crew members.

Their greatest strength is that they are fleet based, and that they mostly go on the run most of the time, they can even at times outrun high end Marine Ships.

Because of Luffy's stubborn nature, hey doesn't really approve of this alliance, and that they go off on their own to accomplish their own roles which would fulfill the purpose of the alliance. 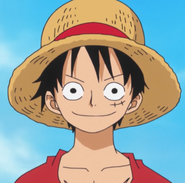 Monkey D. Luffy, Captain and Leader of the Grand Fleet 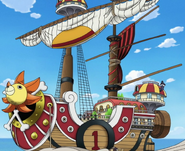 The Captains who have pledged themselves to Straw Hat

Straw Hat Crew members
Add a photo to this gallery
Retrieved from "https://universeconquest.fandom.com/wiki/Straw_Hat_Grand_Fleet?oldid=15897"
Community content is available under CC-BY-SA unless otherwise noted.