Team Rocket Headquarters
This profile is about Team Rocket from Pokémon.

Team Rocket is a criminal organization set to steal other people's Pokémon, with their headquarters in the Kanto Region and the Johto region and a branch in Sevii Islands. They are headed by Giovanni, who also doubles as the Viridian City Gym Leader.

Team Rocket's main objective was obtaining powerful and rare Pokémon to help their criminal syndicate in the hopes of someday taking over the world. They obtain these Pokémon by regular capture, or more often, theft. In addition to this they also perform inhumane experiments on Pokémon to further enhance their power.

Tier 8: Digital: Team Rocket exists in a world where society has digital technology and communicate across long distances and even transmit Pokemon through various machines.

Science: Cloning (Through genetic modification and research, a team of scientists are able to clone different Pokemon, even from ancient fossils) Construction (Certain Team Rocket Members possess skills that allows them to build nearly any vehicle depending on the situation)

Unknown Tier: It is unknown as to how far their organization has spread out in the Pokemon world, They mostly have various buildings and facilities or hideouts that allows them to continue their works.

Team Rocket, being an criminal organization would be hard to put down as a whole as they managed to avoid the authorities at times and continue their operations for a long time. Many of their members even possesses very strong Pokemon after being subjected to certain treatments. They have their own various skill sets and means to capture Pokemon in their own ways, Or even creating their own Pokemon with science, such as when they created Mewtwo. With each Pokemon they have, they have their own unique sets of skills, abilities and powers that can vary depending on who it is.

The Members of Team Rocket possesses normal human weaknesses (while Team Jessie, James and Meowth seems to have higher tolerance but that could be considered Cartoon Physics) The Pokemon that they possess their own individual weaknesses as well. Members of Team Rocket can sometimes be not that smart when committing theft of Pokemon, They usually do things such as Pokemon battle which does not make sense at times.

When a battle is decided, list the wins and loses below:

Jessie, James and Meowth, the most persistent team of Team Rocket 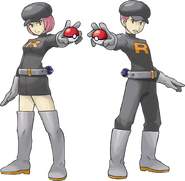 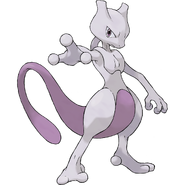 Mewtwo, one of the genetically created Pokemon from one of the most powerful Pokemon in the verse.
Community content is available under CC-BY-SA unless otherwise noted.
Advertisement