The Army of Voldemort is the representation of the strength of the dark wizard's power to command, they serve to fulfill his desires the Death Eaters was the name given to the most ardent followers of Lord Voldemort. The group primarily consisted of wizards and witches who were radical pure-blood supremacists who practiced the Dark Arts with reckless abandon, malevolence and without regard to or fear of wizarding law.

Lord Voldemort used this select group of wizards and witches during both the First and Second Wizarding Wars, employing them as his elite force. They often wore black hoods and masks with snake-like eye slits to cover their faces. The Death Eaters were considered Lord Voldemort's inner circle and had the Dark Mark burned into their left forearms. When Voldemort touched one of them, each of the Death Eaters felt it, signalling for them to Rush to their leader's side.

Not only is his army consisted of regular wizards, but also contains other magical creatures that are subjugated to his will, such as giants, spiders, dementors, etc..

Tier 8: Digital: While The Wizards live in a more archaic and more medieval era life style based on magic, they also coincide with the modern human world which should be similar to our own modern era.

Nature: Human Physiology (The humans of the faction are actually born with the ability to use magic)

Other Tier: Unknown Tier: It is unknown as to how far their conquest has reached across the magical world, likely planet when they controlled the Ministry of Magic.

DC: City Block: Voldemort with semi-full power of the Elder Wand which could destroy Hogwart's Forcefield. Large Building: Voldemort's power rivals Dumbledore, whose Firestorm is this strong, and he split the Brockdale Bridge in two. He's performed spells that not even Dumbledore would dare to cast, such as Fiendfyre, which is certainly stronger than Firestorm. Small building: The strength of Giants who can easily break apart buildings with swings of their weapons. Wall: Voldemort and some of his top lieutenants should be at least physically comparable to Harry, who deflected a bludger when he was only 11 years old (Likely higher with stronger spells). Wall: The standard strength of regular wizards.

Dura: City Block: with magical shielding, Voldemort should be far superior to a bounty hunter capable of blocking attacks from Credence's Obscurus and capable of blocking attacks from Dumbledore. Large Building: Voldemort with spells that he can counter Dumbledors' spells. Small Building: The durability of Giants with their size. Wall: The durability of the average wizard.

Speed: Subsonic: Voldemort and his top lieutenants in reactions and flight speeds (including dementors). Athletic Human: The average running speed of wizards and other units in foot.

The forces of Voldemort are a collection of well known wizards who have had made their names infamous and with their own sets of spells as well, many of them even possess some or all of the unforgivable curses.

Their Greatest strength is their confidence in Voldemort's power, and should his goal be achieved, they would feel like it is a victory for them as well.

Because of Voldemort's obsession with the murder of Harry Potter and the risk of death, he becomes more and more prone to lash out at his followers and make them less likely to be loyal to him. 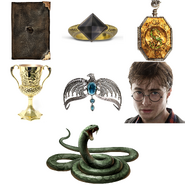 The Horcruxes which allows Voldemort to survive death

The Death Eaters, servants of Voldemort

The Malfoy Manor, one of the many headquarters of the Death Eaters
Community content is available under CC-BY-SA unless otherwise noted.
Advertisement